A tooltip with key statistics and deeper information is shown if you hover over a metric in Pulse. 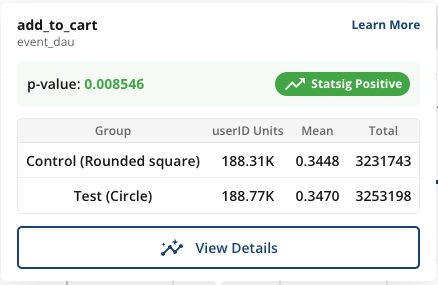 The exact calculation for each of the above depends on the metric type:

In this view, select and drag as needed to zoom-in on different time ranges. Three types of time series are avaialble in the drop-down:

Daily: The metric impact on each calendar day without aggregating days together. This is useful for assessing the variability of the metric day-over-day and the impact of specific events. It's the recommended time series view for Holdouts, since it highlights the impact over time as new features are launched. 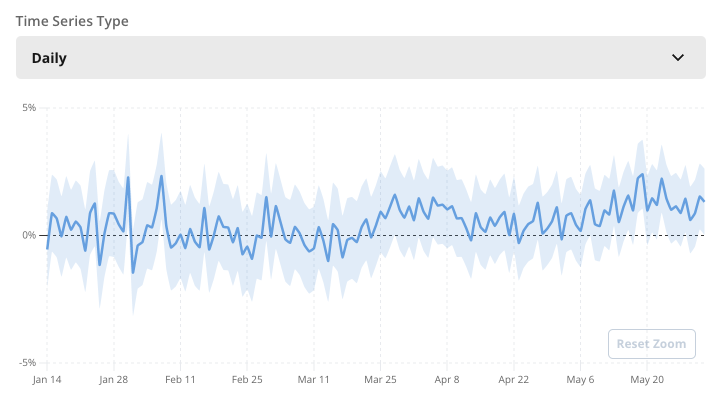 Cumulative: Shows how the aggregated metric lift and confidence intervals evolve over time.

Days Since Exposure: Shows the metric impact broken down by the number of days users have been in the experiment, which helps distinguish between novelty effects and sustained impact. For key metrics, this view also shows pre-experiment metrics to identify an differences that existed between groups even before the experiment started. 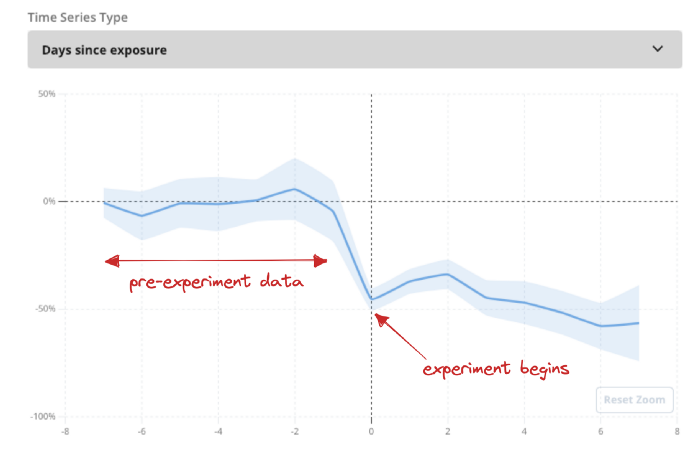 This view shows the group level statistics needed to compute the metric deltas and confidence interval. Includes Units, Mean, and Total (explained above), as well as the Standard Error of the mean (Std Err). Details on the statistical calculations are available here.

See here for details on the exact calculation for topline and projected impact.

Why is the projected launch impact smaller than the relative experiment delta?

Often times, an experiment can impact only a subset of the user base that contributes to a topline metric. So the relative experiment delta that we observe is effectively diluted when measured against the topline metric value.

For example: Consider a top-of-funnel experiment on the registration page. Among users that hit this page, the treatment is leading to more sign ups and a 10% lift in daily active users (DAU). However, our topline DAU metric includes other user segments outside of the experiment, such as long term users that don't go to the registration page. So what was a 10% lift in the test vs. control comparison, may amount to only a 1% increase in overal DAU.

How can the topline impact be higher than the experiment delta?

It's possible for the topline impact to be higher or lower than the experiment delta. This is because the two values are computed differently and have different meaning.

Experiment deltas are based on the unit-level averages: The mean value of the metric is computed for each user across all days, and then averaged to obtain the group mean. The topline impact is computed daily based on the total pooled effect from all users, and we take the average across days to show the daily impact.

We chose to compute topline impacts in this way because most metrics are tracked on a daily basis and the topline value tends to be computed as an aggregation across all users, rather than a user-level average. For experiment analysis, on the other hand, best practice is for the analysis unit to match the randomization unit, so metrics are aggregated at the unit level first before computing experiment deltas.