What is Sequential Testing?​

Traditional A/B testing best practices dictate that the readout of experiment metrics should occur only once, when the target sample size of the experiment has been reached. Continous monitoring for the purpose of decision making results in inflated false positive rates (a.k.a. the peeking problem), much higher than expected based on the significance level selected for the test.

This is because p-values fluctuate and are likely to drop in and out of significance just by random chance, even when there is no real effect. Continuous monitoring introduces selection bias in the date we pick for the readout: Selectively choosing a date based on the observed results is essentially cherry-picking a stat-sig result that would never be observed if the data were to be analyzed only over the entire, pre-determined duration of the experiment. This increases the false positive rate (observing an experimental effect when there is none).

In Sequential Testing, the p-values for each preliminary analysis window are adjusted to compensate for the increased false positive rate associated with peeking. The goal is to enable early decision making when there's sufficient evidence while limiting the risk of false positives. While peeking is typically discouraged, regular monitoring of experiments with sequential testing is particularly valuable in some cases. For example:

Click on Edit at the top of the metrics section in Pulse to toggle Sequential Testing on/off. 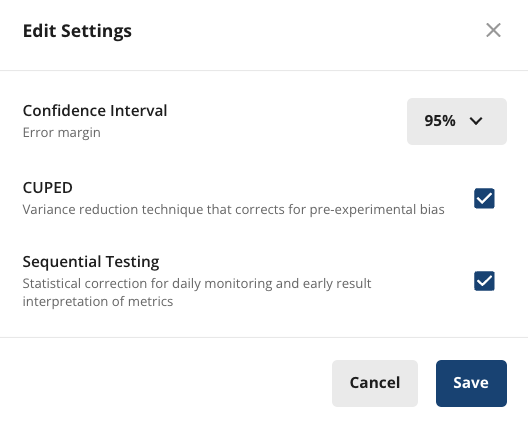 When enabled, an adjustment is automatically applied to results calculated before the target completion date of the experiment.

Hover over a metric and click View Details to review the progression of the sequential test. 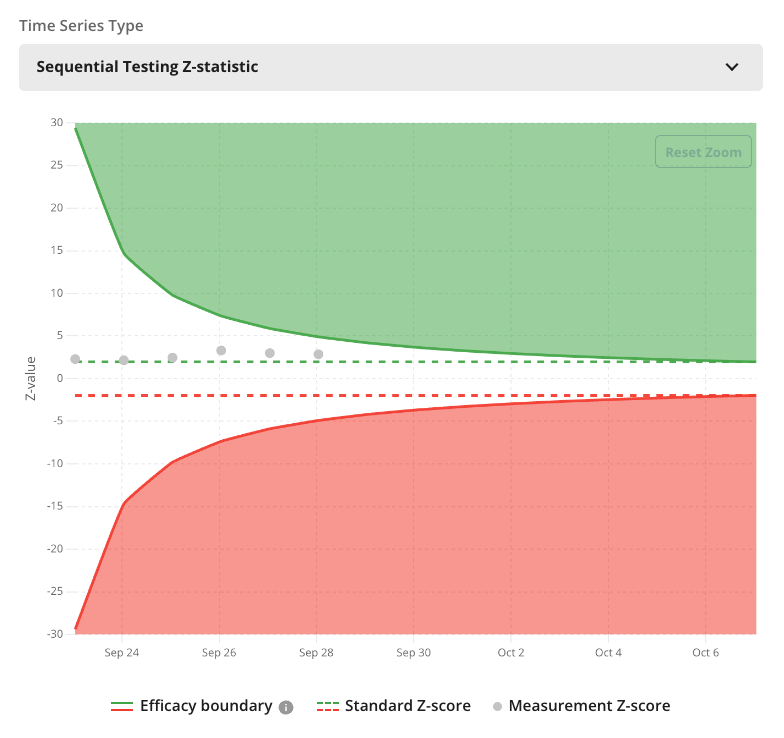 The Sequential Testing Z-Statistic time series contains the following information for a metric:

We use an adjustment factor qn that's determined by the number of days n the experiment has been running:

When the target duration is reached, qn = 1 and no more adjustments are applied. This method has 2 benefits:

On any given day n, the efficacy boundary is given by

where Z is the standard Z-score for the desired significance level (e.g.: 1.96 for two-sided test with $\alpha$ = 0.05). This determines the Z-score threshold for statistical significance on day n.

The Z-statistic for a metric comparison (ZX) is computed in the standard way:

A metric is stat-sig when the calculated Z-score falls outside of the efficacy boundary. Specifically:

The p-value calculation for day n is similar to the standard calculation, but with the Z-score scaled by a factor of qn. This leads to higher p-values, meaning the bar for statistical significance is higher.

Similarly, the confidence intervals (CI) are adjusted by a factor of 1/qn, leading to larger CIs when qn < 1.